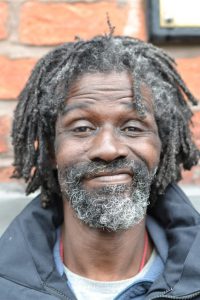 I was with the mother of my children for 14 years, and after she cheated on me I went downhill. I’ve had my fair share of ups and downs. There used to be nine of us siblings, I used to have seven brothers but I lost four.. Lost two of them coming back from a funeral in a car crash, my two eldest brothers.

I was alright until recently, had myself a house for four years, then they just went and cut my benefits. Everything was hunky dory, then I missed one appointment at Alfred Bridge that I couldn’t get to because of my arthritis, and they just stopped my benefits. I didn’t get a sick interview, even though I had sick notes. They just took away my income. That’s what they’ve done now with everybody, they’re messing them around with the benefits system, just stopping people’s benefits. That’s lethal, that’s lethal at this time.

So do you think the system plays a part in keeping people on the streets?

Oh definitely, the system makes it worse. I don’t think they are putting enough effort into it to sort people out. When you go for that assessment with the benefits people to see whether you can work or not, it’s just one person talking to you, one person asking you to “do this, do that, bend this way and that way”. And that one person has the right to say, “he’s fit for work”… they’re not feeling your pain. They don’t know what’s going on, they don’t empathise. And they keep closing things that make a big difference. The country just isn’t working right.

We had a hostel down the road, it housed 150 men, we all had our own rooms, you could have your own television in your room, you had to be on benefits anyway, so you paid your benefits to them. Your mail came to that address, we got warm food, and they helped sort out all your paperwork to get into permanent housing. I was there for a while after I went to prison, and they helped me sort out my papers and I got into a flat after that. It was a great system, but they knocked the place down…. it got flattened the other week! Knocked it down to make more student accommodation, it’s all about bringing money in. They’ve got enough flats, and enough room, but they don’t give it to the right people… it’s all about the money.

Do you think that the current system ignores homeless people?

Yeah it’s because homeless people don’t contribute to society so they are forgotten, they don’t care. When you’re contributing you’re Jack the Dad, when you’re not you’re a piece of shit, and that’s the way they’re doing it. Whatever they can do is for the working class (those with jobs), because they might be putting something back into the system, but a homeless person is not putting nothing in the system anymore. They want what’s best for the working class. But you can’t be thinking only about the rich, you got to be thinking about everybody. They might be working for years and years, like I’ve done, but you get to this point, where you’re not putting in anything in and you’re getting something out of the system (benefits). And, seriously.. I don’t see it changing, once one government is into one routine you get another government that’s into the same bloody routine. They’re all in the same routine.

How do you stay so positive?

I don’t whinge, I don’t whine about anything, I just get on with it and deal with it. I like life! I’m still having a good life. I’d rather be out here, with nothing, than being in jail with everything. Out here, even with nothing, you’ve always got an opportunity of getting something. I’m not going through no states of depression, I’ve seen two of my family members go through that. One of my brothers committed suicide, hung himself. A nephew followed him and done the same trick. I don’t even have a place to stay but there’s no way you’ll catch me getting depressed.

Also, I interact with everyone, children, old people, I try put a smile on their face. You wave to kids and say “Hello small person!”… you get a wave, the kids are buzzing the parents are smiling, it’s small interaction… Just to make them know it’s another human being that they’re talking to. Some of them stop and say “thanks for putting a smile on my face”. They could be down, depressed for whatever reason, a lot of them they could say to you, “ah you’ve stopped me from doing something stupid tonight now, you’ve put a smile on my face”. I’ll be down on the street sitting on my butt and I’ll still be smiling, so they can’t help but get a bit of positivity.

What advice would you give others to stay positive?

There’s always people who are out there to help, it’s out there for you! Get out of a negative mood and get positive. If you want help, you get help. Talk to people as well. When I was in prison I became a ‘listener’, they gave me a two man cell, when someone was feeling suicidal, down, depressed, they used to ask you, as a listener, to let them sit in that cell with you. You’d just have a chat and be a bit of comfort. I still play that role, if I see someone down I’ll ask them what’s wrong, and give ‘em five minutes cus they might need that five minutes. Like I said I’ve had two suicides in the family, and they didn’t go to nobody, they just held it in. That’s a person that’s gonna commit suicide,  when they hold it in. If you asked what’s wrong, they won’t tell you nothing. Both of them used to be talkers, so when I see someone stop talking, I know there’s something wrong. And that’s through experience. So just keep talking to people.

What are your experiences with the public on the street?

Once I asked someone for a bit of change, and one guy stops and asks what I need the money for. So, I tell him whatever I need it for, like whatever I’m gonna use it for. He goes “You’re quite honest aren’t you” and he gave me a tenner. He walks down the road then comes back up. I say “Nice one for that brother” and he whips out his wallet, pulls out a bunch of money, and gave me two-hundred quid.

Then this other time, there was a girl outside the chippy once, and she was really sick. She wasn’t even drinking, I think she just had food problems. She couldn’t stand up so I sat her down, went and got her some salt and warm water. She knocked that back and I sat with her while she was all mumbling and crying but in about ten, fifteen minutes, she was right as rain. Then a couple of weeks later I saw her again and she was like “Ah you were the only one who actually stopped and saw if I was okay and helped me that night”. She said “C’mon come to the bank with me”, and withdrew fifty quid and gave me that. Good things happens to good people!

What do you think the public think of people on the street?

Most people, especially the police think everyone they see on the street is into substances.. drinks, drugs etc. That’s what they think. But not everybody is! Some of them out on the street, could be there because the system’s failing them. There’s so many issues with mental health at the moment which I never saw when I was growing up, I didn’t see as many people with psychological problems as I do now. And the failure to deal with those psychological issues is what’s keeping people on the street. They always trying to categorise us and put us into boxes with labels.

If you were put as Mayor of Manchester, what’s one of the first things you would do?

Housing first, rooms are the first priority. Somewhere where they can stay, roof over their head, somewhere permanent not just for one night. Also, I think they should make it so people have to think for themselves… people get lazy when they are given stuff for free, so make sure people have to think. Then assess them, and ask them what their needs are. They gotta find out what people’s needs are, none of us are the same! Every single human being has a unique way of dealing with things, that’s what makes us special. If you have sextuplets, every one of them is going to grow up in their own way, even with the same parents! Yeah, everybody needs a different response, for their different needs. That’s why individual assessments are most important, because they got to address everyone’s psychological issues. A lot more people have mental health problems now than ever before, but they deal with them all in the same way, that needs to change.

Do you have any last comments?