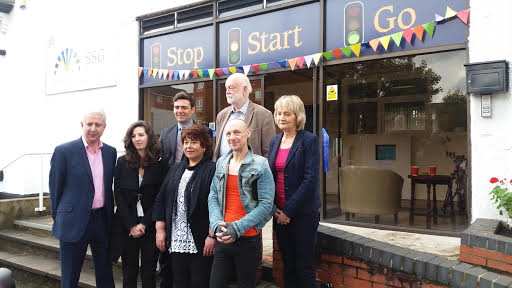 An innovative hostel for homeless people will be officially opened on Tuesday 10 October, World Homeless Day.

The Stop, Start, Go Sustainable Living hostel (SSG) in Cheetham Hill has been jointly funded by Manchester City Council, The Mayor of Greater Manchester’s Homelessness Fund and the Edward Holt Trust. The Edward Holt Trust is a charity which originated in a 1950s endowment from a member of the Joseph Holt brewing family, and it’s helped a number of homelessness projects across Greater Manchester with capital funds and other support costs.

The centre, which currently has 12 beds – soon rising to 15 – provides medium-term accommodation to take people who are rough sleeping away from the streets while they get their lives back on track. They also receive additional support to get them into education, training or employment and help them find somewhere permanent to live.

How the hostel helps people

SSG’s work includes ensuring that people who are already in work but are homeless have somewhere stable to stay. It tries to ensure they don’t lose their jobs while they get back on their feet.

Rough sleepers are referred to Stop, Start, Go by the Booth Centre. The Booth Centre supports people who have lost their homes or are at risk of losing them, and people can also continue to benefit from access to activities at the Booth.

What donors say about SSG

Councillor Bernard Priest, Deputy Leader of Manchester City Council, said: “This hostel is an inspiring example of the partnership approach we are taking to addressing the challenge of homelessness in this city. We warmly welcome the support of the Mayor and the Edward Holt Trust which, together with the Council’s funding, have helped make this hostel a reality.

“It is only one part of a concerted approach to this issue, but no less important for that. I’m confident it will change lives for the better by not just putting a roof over people’s heads, but crucially also providing the wraparound support that will enable them to move forward in their lives.”

The Mayor of Greater Manchester Andy Burnham said: “The opening of the Stop, Start, Go Centre is a big step forward as we work to end rough sleeping in Greater Manchester. The people using the accommodation have themselves been the ones who helped shape how this new centre will work, and I’m confident their approach will make a real difference.

“The Centre’s plans to offer tailored support for as long as people need it is exactly the approach I want to see across Greater Manchester. The generosity that people have shown by donating to my homelessness fund has helped this centre to open its doors.

“We’re beginning to make a real difference together, but the work is just starting. We still need your help to support more excellent projects like this one. Any amount you can donate, no matter how small, will go straight to organisations who are helping rough sleepers and homeless people across Greater Manchester.”

Richard Kershaw, Chair of the Edward Holt Trust said: “We are pleased to be able to offer vital additional funding to this new hostel, as part of our commitment to the work of one of its partners, the Booth Centre. It is vital that people are helped to hold down jobs and make the difficult transition from homelessness to independent living.”

What hostel residents say about SSG

Hostel resident Mohammed Abdulkarim, aged 22, said: “Since coming to SSG, I have started college and sorted out my health. I am a new being and my future looks good now.”

Fellow resident Lee Wright, aged 41, said: “Coming here has made a massive difference to me. I was on the streets for a year. Staff have been very helpful and helped me to feel better psychologically about myself. A new outlook has opened up for me and I feel happier about the future.”

The centre started receiving referrals at the end of August this year. Donate to Mayor Andy Burnham’s homelessness fund.