The Provision For Substance Misuse In The City 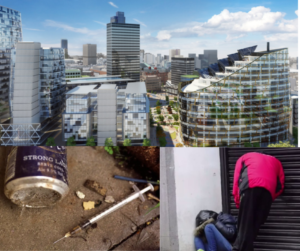 On 9th July the MHP VOX POP Action Group (comprised wholly of people with personal experience of homelessness) focused on the The Provision For Substance Misuse In The City. Joining the meeting was Kate McDonald, MCC City Centre Public Services Manager.

Kate has identified room for improvement in the city and works with all stakeholders in the city, including people with a personal insight into homelessness, substance misuse, mental health etc. Kate reports to the Manchester City Centre Accountability Board and Richard Leese (Leader of the Manchester City Council) so any feedback from the group with regards to this issue will reach the Accountability Board.

What is the city missing when offering solutions to people who are homeless and have substance misuse issues and is what the city currently offers enough?

Many thanks to the Manchester Homeless Partnership VoxPop Group for sharing this useful feedback.

Thanks as ever for your continued support.