A nurse from Southampton , who has dedicated her career to helping homeless people, has today been announced as the national winner of the Lifetime Achievement Award category at the NHS Parliamentary Awards, prestigious awards that celebrate people who have innovated, impressed and make a real difference to how the NHS provides care for patients.

Pamela Campbell, who works as a Nurse Consultant for Homelessness and Health Inequalities at Solent NHS Trust, was a founding member of the Homeless Healthcare Team, set up in July 1992 and is recognised as a national leader in the field of homelessness.

The Parliamentary Awards asks the region’s MPs to find and nominate those individuals or teams they believe have made the biggest improvements to health services in their constituencies across ten categories. Pam Campbell was nominated by Southampton Itchen MP, Royston Smith. She was announced as the regional winner in June, and today visited London for the finals where Simon Stevens, NHS England Chief Executive and Matt Hancock, Health Secretary and MPs from across the country to celebrate the difference Pamela has made, awarding her with the Lifetime Achievement Award.

Pamela qualified as a Registered Nurse in 1979, before becoming a Nurse Practitioner in 2001 and then a Nurse Prescriber in 2002. Talking about her career, Pamela said: “It has been my privilege, for the past 27 years, to work with people experiencing the lack one of the most fundamental human rights – a home.

“I have come to realise that being an advocate for a truly marginalised group of people has brought me into contact with truly incredible people, but also the hasher side of life. Standing up for something that is so right has prevented me falling for anything, to paraphrase an African proverb.”

As well as leading the Homeless Healthcare Team in Southampton, Pamela has been instrumental in the development of the Alcohol Day Detoxification Project, which won a Public Health Nursing Award in 2014, and the Breathing Space Project, enabling safe and supported discharge of homeless patients.

Most recently Pamela has been involved in the initial stages of healthcare to Syrian refugees who have been offered asylum in the UK and a peer advocacy project to help homeless people to engage better with health services. 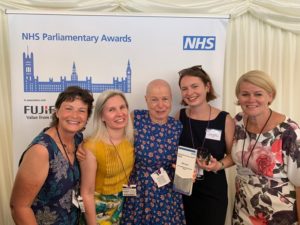 Congratulating Pamela on her award, Solent NHS Trust’s Chief Executive, Sue Harriman, said: “I know that everyone in Solent NHS Trust is over the moon that Pamela has been awarded this incredibly prestigious award and that her dedication has been recognised and celebrated today.

We can’t praise Pamela enough; she is an incredible lady and a selfless person who gives so much of herself to helping some of the most vulnerable people in Southampton. I am completely in awe of Pamela, and the difference she makes, she is a real inspiration. A huge well done to Pamela, and a big thank you for dedicating your working life to the service.”

Simon Stevens, NHS England chief executive, said: “It has once again been a privilege to celebrate with some of the extraordinarily dedicated and selfless health and care heroes who make the NHS what it is today – the much-loved institution that our patients say is what makes them most proud to be British.

“From those who have devoted their lives to helping people and supporting some of our most vulnerable, to delivering pioneering lifesaving treatments, the NHS Parliamentary awards are rightly honouring those who continue to make a huge contribution to our country, through our NHS Long Term Plan.”

Royston Smith MP, said: “Through Pamela’s work with the most vulnerable in society, she has helped countless numbers of people return to a stable healthy life. Southampton is truly grateful to this health champion and guardian.”