The goal is to end homelessness in all its forms in Manchester.

This network of people across the homelessness sector are trying to change policy and practice responses to our rising levels of homelessness.  The ‘change’ that we are talking about is putting the voice of people who have experienced homelessness themselves at the heart of decision making across the sector.

The group were at pains to point out that the ‘homelessness’ they were talking about was more than the clear visible signs of poverty seen in our city centre.

People who sleep rough represent the minority of people who face homelessness. It’s estimated that the visible forms of homelessness in our city represent about 2% of the overall picture.  This is supported by the data – the governments recorded 4,134 people sleeping rough in England in 2017 is 2% of the national charity Crisis’s estimates of broad levels of homelessness for that year being 268,330 people. 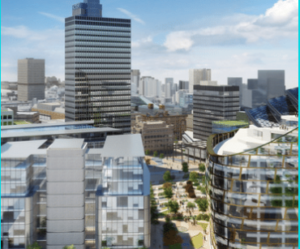 People at the meeting are passionate advocates for the Manchester Homelessness Partnership as a vehicle for driving change.  But it is felt that local government policies and politics do not reflect this work and ideas. Despite the good intentions of some local officials within the tightly defined homelessness sector, this partnership is ignored by a city that favours housing developers and a drive for creating a city full of glass towers.

Amidst the understandable frustration, one hopeful voice in the group pointed out that the partnership doesn’t realise how much power it actually had. Following this chain of thought, we came to this question:

What do we want to see happen?

Many of the attending group have been involved in the previous winter’s A Bed Every Night campaign (aiming to provide temporary shelter throughout the winter months). Manchester Homelessness Partnership want to see the cities response go much further…

We want to see a city where everyone that wants a home is able to find one. And beyond that, we want to see more support available to enable people to live a full, healthy, independent and fulfilling life (including better support for mental health, dual diagnosis and other issues we know about).

A return to adequate supply of affordable and social housing for any housing developers out there wanting to support the Manchester Homelessness Partnership.  The grassroots and third sector group who met today value the work of Greater Manchester Housing Action who have consistently petitioned local government to enforce Section 106 of the Housing Act to ensure that housing developers meet their affordable housing obligations. There are still many examples where this doesn’t seem to be happening.

Alongside other cuts to services, benefits changes and other interrelated issues leading to poverty and homelessness, the results are clear for all to see. We support the efforts to respond to the current crisis with more emergency beds, and at the same time, as a city, we need to keep aiming for more homes and support services.

With thanks to Nigel Almark for this content. Nigel is a community researcher at Manchester Metropolitan University in the final stages of finishing his doctoral thesis.  His research has been with the Manchester Homelessness Partnership and for two years he has spent time understanding how this network of people across the homelessness sector are trying to change policy and respond to rising levels of homelessness.