Written by Rachel Briant, working on behalf of It Takes A City

On October 10, over 70 people from the community of Cambridge – agencies, local authorities, faith communities, business, educational institutions and people who have been homeless – gathered at the Gonville Hotel to mark World Homeless Day and to celebrate the launch of It Takes a City – A Cambridge Homelessness Partnership and Street Support Network Cambridge. 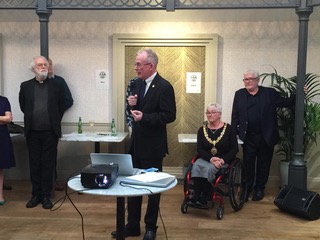 Gerri Bird, the Mayor of Cambridge, opened the evening, thanking those from the local community of Cambridge for their interest and combined efforts to tackle the issue of homelessness since the summit held at St Paul’s in November 2018. The Mayor thanked the Gonville Hotel for hosting the evening and for their generous contributions toward Street Support Network Cambridge. Dr Rowan Williams, Master of Magdalene College shared a few words and reminded us all that a collaborative plan is critical in addressing the growing problem.

The flow of the evening consisted of a brief presentation on progress so far from Chris Jenkin, an ITAC representative who reinforced that the city-wide partnership is bound by common values and vision and, importantly, co-produced with ‘experts by experience’ of homelessness.

We received an impressive update from all of the seven Action Groups that had formed as a result of the summit – Women, Youth, Information, Housing, Work, Support and Digital. To learn more about the work that has been undertaken so far and what the Action Groups hope to achieve in the coming months, please read our Action Group Update. 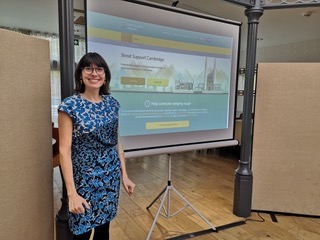 It was incredibly moving to learn of the several cross-sector projects that had evolved, one notable project being Cambridge joining the Street Support Network alongside 21 other cities. Jo Davies-Warner went on to give everyone a live demonstration of the Street Support Network Cambridge site and shared the progress so far and the next steps of development for the platform.

People who have been homelessness shared their involvement so far in It Takes a City, be it a Trustee of the new partnership, co-chairing Action Groups or being members of the Steering Committee, one citing that it took a city to save them. Individuals spoke openly and honestly that words are no longer enough, and that action is needed ‘now.’

We invited Gary Dunstan from Street Support Network to share some thoughts, notably, he concluded that there was no room for agendas or siloed working, but a commitment to a holistic and collaborative approach if we are to see sustained and lasting change in the city.

The evening concluded with a ‘Call to Action’ to respond to the pressing needs. A number of asks were presented to the local community to move the work of the partnership forward. Amongst a number presented were requests for pro bono advice and expertise, resource and much-needed finance to fully fund the Street Support Network platform, employ a number of posts and launch bespoke projects.

After having discussions with Action Group representatives and one another, it was clear that individuals were impressed and moved by the amount of progress that had been achieved in less than a year, but with an understanding that there is still so much more to do.

An excitement lingered in the air, a momentum, a commitment to change and progress, not in isolation, an acknowledgement that we are all in this together and that it will take a city to end homelessness.

If you would like to be involved in the partnership, please email Rachel Briant, It Takes A City Coordinator.