To mark World Homeless Week and Homeless Sunday in Islington, London, grass-root organisation Streets Kitchen, amongst others, organised a special event at the iconic Union Chapel. The event ‘Shock to the System’ which received a great turnout, acted as the community response to Islington’s homelessness crisis through people’s experiences. 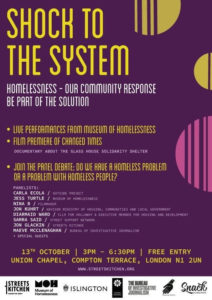 The event was hosted and facilitated by award-winning BBC broadcast journalist, Greg McKenzie and the community had the pleasure for the opening remarks to be addressed by their very own local Islington Mayor, Rakhia Ismail who demanded: “We are all responsible and we need to act now”. She summed up the seriousness of the crisis when she said: “We won’t have a society to hand down to our children if we have people dying on our streets today.”

The Museum of Homelessness (MoH) who brought some of their special object stories and delivered live, powerful and moving performances was one of the main highlights of the evening. These objects were given to MoH with real-life stories that say something about the crisis we see today.

Our colleague Samra Said was on the panel discussing how homelessness is portrayed with fellow panellist Jess Turtle (Moh), Jon Kuhrt (Adviser MHCLG) and Maeve McClenaghan (Bureau of Investigative Journalism). Samra spoke about how communication is crucial in changing the way homelessness is framed and how more needs to be done to make prevention the core focus of the sector’s programming. The discussion was honest and explored structural issues, with Jess Turtle making the plight of migrant rough sleepers central to the conversation. Jon Kuhrt who was pressed for answers for the role MHCLG plays in tackling homelessness said that rough sleeping was the tip of the iceberg.

A short documentary Changed Times, produced by Nina B, looks at the recent Glass House Solidarity Shelter in Islington was screened for the first time. This screening welcomed the second panel who discussed what is a community response. The panellist consisted of Diarmaid Ward (CLLR for Holloway & exclusive member for housing and development), Jon Glackin/Streets Kitchen, Carla Ecola (Outside Project) and Nina B (Filmmaker). The conversation shed light on the plight of the homeless community, the urgent need to utilise empty buildings as it is a disgrace that people are sleeping outside and ways members of the public can actively get involved to tackle homelessness. Many questions from the audience were directed at Diarmaid about the role Islington Council plays in addressing homelessness who said:

“We want to unite everyone who wants to help the homeless community. The council should act as the glue to bring commissioned and grass-root/radical services together. Solidarity doesn’t cost any money.”

Carla Ecola responded with how “If the government wanted to end homelessness they would. There are community groups out there doing the work”.

What was fascinating about the Shock to the System event was the voices of the homeless community were heard as they actively contributed to both panel by asking questions that highlighted their lived experience, providing moving testimonials. The success of the event was a testimony to what happens when organisations unite for the common good.
You can catch up with #ShockToTheSystem for all the highlights.