(A Twitter thread. With thanks to @karynmccluskey for sharing)

“So spent the evening in 2 drug consumption rooms in Copenhagen and trying to process what I have seen. I won’t do this justice and probably have to reflect on it, but I met one of the most expert, practical managers in the DCR and I am in awe. His expertise was off the scale…so 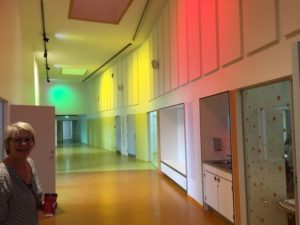 H17 is the biggest Drug Consumption Room (DCR) in the world, warm, clean with a mixture of both injecting and smoking rooms…yup smoking rooms. Individual cubicles where people smoke drugs – the air is cleaned 4 times a minute to protect the individual and the staff.

Skyen, the smaller of the drug consumption rooms had facilities for injecting and smoking – it felt more intimate and manageable. The rooms are separate from each other. All the injecting materials and smoking equipment is provided. Its very clean and well managed.

There was a calm atmosphere there and people were known and welcomed. The staff were vigilant but only in relation to the health of people coming in.
4 rules only:

1. Obey the staff – dignity
2. We will resuscitate you in case of overdose
3. No fighting
4. No weapons 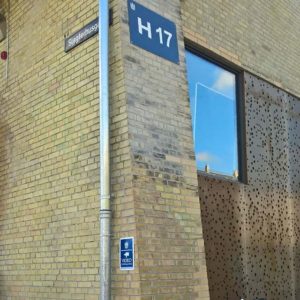 Rules are agreed with those who use facility and the staff set a low threshold to enable those to use drugs safely. AND they will allow dogs in! I asked specifically.

They also will test the drugs there and then so people know what they are using…an unintended consequence of the testing is that dealers are no longer cutting the drugs as much with other chemicals! They also use vein scanning so people can find a vein easily…but also if injecting goes wrong, the staff provide antibiotics to stop infected injection sites. This stops people using hospitals later on with terrible wounds.

There is also access to treatment – medical, dental and chiropody at the DCR – this was essential they said.. injecting cocaine is common and some inject 30 times a day…that’s a huge toll on your veins & system! 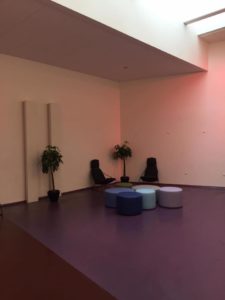 HIV cases have plummeted…who knew! I asked about the small things that they had learned… so people injecting cocaine often rake in bins for around 20 minutes after taking drugs – they had to make sure people could rake in medical waste.. It’s just a thing that they do….they also are super sensitive to sound, chairs dragging over stone floors would set people off, and so linoleum and chairs with stoppers on the bottom reduce the noise and so flash points are removed.

The amazing Peter who took me round said they have only refused 3 people in all the time he has been there. He said that…

……all sides of the political divide had come around to the idea of DCR – it worked morally, medically and financially.

It took around 2 years for the DCR to really get to full operating capacity and be trusted by those who used it. It needs to be dispersed across a city and not centralised – of course. The DCR’s are in areas that are gentrified, they do not hide them away…and why should they.

Peter said to me…

‘everyone in here has had a life of trauma, sexual abuse and neglect….the people who will use us in 15 years time are sitting in our schools.’

As an ex nurse and someone who has worked with so many people in addiction I admit I found it overwhelming tonight. Done well, delivered compassionately and thoughtfully, it is a thing to behold. There was a church across the road from the DCR, in truth, the service that I saw tonight provided sanctuary and peace too.

It isn’t easy, certainly, but what else is there in the face of all the deaths in Scotland?

It’s not the single solution, of course not, but we should try to speak the uncomfortable truths among friends about what’s happening to our fellow human beings who have no-one to help them.”

Thanks as ever, for your time and continued support.