Sadaka, founded in 2017 lives by the motto “Giving without judgement or bias”. Working within Reading, they aim to adhere to their motto by providing food and food boxes to those in need.

Initially, Sadaka was serving hot meals to people in need on Saturdays. As the organisation became more well known and was seen as a source of support for people in crisis, they noticed an increase in the number of meals they were serving each year, as demand for help also increased. From 2017 to today, they have served just under 10,000 meals to people in Reading. 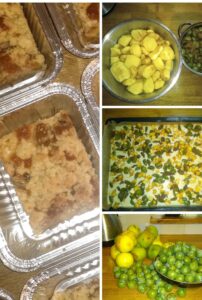 From 2020, Sadaka set up a refugee project. They work alongside Reading Red Kitchen to help refugees and asylum seekers, including children, that are temporarily housed in Reading during the pandemic. Using provisions from donors such as MCKS and the National Lottery Community Fund, Sadaka has been providing people with nutritious, culturally appropriate food. Since July, Sadaka has given 40 hot meals to these refugees and asylum seekers every Sunday. It was envisioned that this would be a 6-month project but it could be extended if Sadaka is able to obtain sufficient funds.

Through the act of providing food to people, relationships started to be formed and it was soon identified that as well as food, people needed more support in order for them to get back on their feet. In September 2020, with funding from the ESFA and the European Social Fund, Sadaka established a new training programme called ’Step Up with Sadaka’. Step Up aims to give participants an opportunity to transform their lives and take steps towards further training, volunteering or employment. The programme consists of three stages which includes confidence building and essential workplace and employability skills. It’s early days, but Sadaka hopes that more people eating with them will see Step Up as an opportunity for them to learn valuable skills and enable them to move out of the vicious cycle of despair, poverty and hopelessness.

Sadaka currently has a team of about 30 dedicated volunteers. Gina B tells us, “I’ve been a volunteer with Sadaka since it’s early days. Why? Not only is the team great to work with, and the home cooked food heartwarming, I’ve found the people who come to us to be almost without exception courteous, helpful and appreciative of the service. When asked what would be most helpful during the COVID crisis, one person replied that it was the charity’s humanity that he most valued.”