Since 2016, a large part of Host Nottingham’s support to refugees and asylum seekers has been their clothes bank housed within the Nottingham and Nottinghamshire Refugee Forum, providing clothing, bedding, shoes and bags to those seeking asylum in Nottingham.

In March 2020, the clothes bank had to close along with many other services due to the Covid-19 pandemic. As the restrictions eased around June and July, the Refugee Forum found many of the asylum seekers they spoke to needed clothing, so we were able to send out some clothing parcels with the food parcels they usually received. 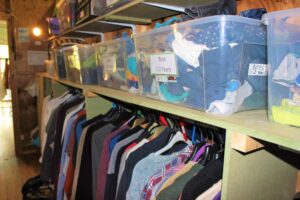 By August, our volunteer team had reorganised our clothes bank making the space Covid secure for our volunteers, as well as labelling every single item, making an efficient delivery service possible.  Included within the clothes parcels were facemasks, some toiletries and even some treats for those with families.

Since March, the clothes bank has delivered over 300 clothes parcels, with an average of 10 referrals a week (but in busy weeks receiving as many referrals as 25 per week). As well as receiving donations from local partner organisations, such as Sharewear and Shoe Aid, we’ve also received lots of donations from the public in response to our call outs over social media platforms. We’ve even been able to grow our volunteer team during the lockdown, it’s been very encouraging to see members of the public offer their donations and time during these difficult times.

One of the families who have received a clothes parcel, was a family of three with both of the parents attending college. Our Clothes Bank was able to provide them with some clothing, duvets and bedding and rucksacks to use for college. Suzanna (named changed) said: “Thank you so much, everything was great and it has made such a difference. All the clothing especially was lovely.” She now wants to start volunteering at the Clothes bank to help others. She’s shared about our work with her friends. 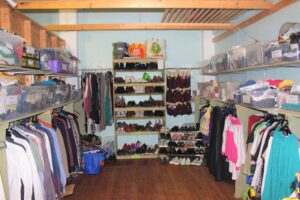 Another family who benefitted from our clothes bank was a family of six. The eldest daughter said: “Thank you so much, the clothing fits great and we’re very grateful!”  Delivering clothes parcels to those we support can sometimes lead to other connections. Jane, our chair, was also able to help one of the sons into a local football club and although it is closed for the moment, they think it will start up again next week and he is looking forward to that, he’s already been to a few practices. The owner of the team was able to provide him with some football boots free of charge.

We have also recently launched our Winter Clothes Bank Appeal, that seeks to raise funds to buy new underwear, and warm socks, hats and gloves to give those we support dignity and warmth this winter. We’ve been able to raise £260 so far, and will be continuing the appeal to the end of January. You can donate to this appeal here:  https://hostnottingham.enthuse.com/WinterClothesBankAppeal