Sanjay Mall has been nominated for the Police and Crime Commissioner Volunteer of the year in the South for his work with the homeless in Southampton. Sanjay has worked with the Big Breakfast at Above Bar Church for 12 years and this year set up the Big Difference to provide meals for the homeless. The Big Difference has grown dramatically and is now providing meals to many people without food. 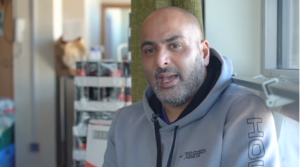 Local partnership with the council, Southampton City Mission and Fairshare enabled the Big Difference to start up, with the aim of providing meals to homeless people in B&B accommodation during lockdown. As it became established, both the need and the supplies of food have increased.

Shifting from a weekly breakfast into a major food distribution hub helping feed the homeless, with 3688 packed lunches going to those housed in B&Bs is an amazing journey. Currently they support 9 schools on the east of city with their holiday hunger projects, as well as 18 other food aid programs run by smaller groups and organisations. In total, The Big Difference has given out 4111 food parcels, 720 homeless packed lunches on the street and 39630 frozen meals, and are currently feeding an estimated 250 people per week. Southampton City Council have also committed to working with The Big Difference for 2 years, with a particular focus on the east of the city. See a short video of their work on the link below.

When asked about the nomination, Sanjay says, ” It has been a real privilege to be nominated for Volunteer of the year in the South. There were 7 other people who were doubtless outstanding in their areas, so being a runner up is great news for the whole team. All we have achieved is because of the work of our loyal Big Breakfast team and since the beginning of the pandemic, the Big Difference. They served the homeless 7 days a week and now have expanded, offering food bags for families in partner schools and other community groups.  Most of all I would like to thank God who has opened so many doors and made all this happen.”

You can read Sanjay’s story and from the first lockdown, posted in May this year here.