(Action Together support the community and voluntary sector in Rochdale, Oldham and Tameside)

A Homelessness Prevention Strategy to cover all of Greater Manchester has been an ambition of the Homelessness Action Network for long before the pandemic. It’s a fundamental part of why we exist: to take ‘action’ on homelessness is not merely to limit the results of a broken system which leaves people homeless, but to address the reasons which lead to people getting there. We are as outraged by the fact someone might become homeless as we are moved by the hardship of someone sleeping on the street.

Our efforts to draw a homelessness prevention strategy together began in 2020 with Legislative Theatre sessions drawing on people’s lived experiences of homelessness. Those workshops invited people from across the region to participate in exploiting multiple disadvantage, funding and commissioning and structural racism in homelessness services, and the Housing First programme. These threw up ideas for prevention which could be the foundation of a plan of action. A lot of hard work and consideration by senior decision makers on the Mayoral ‘Programme Board’ for the entire city resulted in the draft that we brought back to the Network members on 22nd March 2021. At this event, 100 Network Members joined together to start unpacking, critiquing and then thinking about how to deliver the strategy. You can see the feedback which was given by following this link. Our colleagues at GMCA went through the jamboard’s feedback from the event and they are re-framing the strategy so they make it a means of change so a participatory element is involved. They found the process useful in getting an idea of what is missing from the draft and what may not have been considered.

If you missed the GMHAN Full Network Event, you can watch the recording here

So what is in the strategy?

The GM Homelessness Prevention Strategy looks at homelessness through 5 ‘layers’ of prevention, as shown in this diagram developed by academics Beth Watts and Neil Morland. 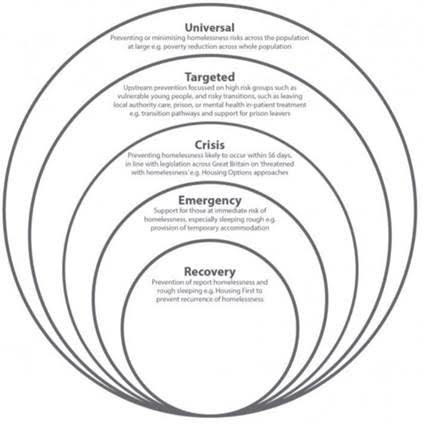 Of these, ‘crisis’ and ‘emergency’ responses have in the past been the main focus of homelessness services and available funding. With this prevention strategy, we’re aiming to go much deeper into the circle at the very middle – sustainable Recovery – and those outer rings of Universal and Targeted prevention.

The points raised by the Network members at the March event were wide and deep, so hard to capture in a few sentences! Some themes did crop up time and again however, and these in particular will be informing the next phase of writing the Strategy. These include:

Where do we go from here?

A key part of why the Network exists is to provide continual feedback loops between people experiencing homelessness, those working to end it, and decision makers making policies and allocating budgets.

The next stage of the Homelessness Prevention Strategy is keeping those loops going, so we’ll be hosting a series of ‘Open Space’ meetings to look deeper at sections of the Prevention Strategy. These ideas will help the next re-draft which will be signed off by decision makers from all 10 Local Authorities at the GM Programme Board.

Each will be led by a different Network member with insight into that area, but we need you – the people who want to end homelessness in Greater Manchester – to contribute and make this a Strategy meaningful to all of us. To find out what sessions are being run and how to sign up, go to www.gmhan.net/news-and-events. You are our greatest messenger too, so if you know someone whose voice you think would be valuable to add, let them know and get them along!