After three years as Chair of Luton Homeless Partnership, Matthew Bushnell steps down and passes the baton over to Tim Archbold. Matthew was a great support to Street Support Network and his presence will be missed. However, after our last few connections with Tim and getting to know him more, we feel our partnership will be just as strong with him in post. Tim shared the reasons he feels so passionately about the LHP and opens up about his past experiences of experiencing homelessness with the Network. 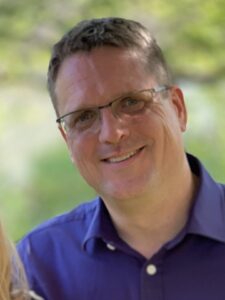 I would like to take you back to the autumn of 1993, Ford have unveiled their new Mondeo, John Major is Prime Minister, the Channel Tunnel is ready to be opened and following seduction by the rave scene a lonely and scared 24-year-old is admitted to a male only homeless hostel in Willesden, Northwest London.

I remember this day like it was yesterday, it took 3 baths for me to remove the smell and engrained dirt that living on the streets of London for 2 months had left.

It would be wrong of me to say that my stay at that hostel was totally awful, however what I now can see is that the lack of dignity was immense. The staff were kind and caring people, I created friendships with my peers, people from backgrounds I had never encountered before.

I was introduced to a new world, a traumatic world and one it would take another 15 years for me to fully recover from.

From this hostel I lurched from one crisis to another, one job to another and one relationship to another. Until in 2008 when addiction had finally beaten me to surrender, and another period of homelessness brought me to recovery.

However, in 2007 when I became homeless again in my hometown of Luton, those experiences in 1993 meant I refused to go to hostels for help. I had vowed never to use a hostel again.

These are the reasons why what we are doing at the Luton Homeless Partnership (LHP) is so important to me personally. I am committed to hearing what every individual that uses our services really thinks and to co-design, co-produce and co-deliver services that hopefully stop experiences like mine from happening again.

I now work for one of those hostels in Luton that I refused to go to and despite my significant lived experience of homelessness and addiction, it is so essential that in my current role with Signposts I listen to what people in our services say today. That’s the lived experience the LHP is committed to listening to and in my role now as chair of LHP I shall do everything in my power to make sure it shapes us all.

I look forward to working with you all over the next 2 years, the progress our partnership has achieved under Matthew’s leadership has been immense and if we can achieve half as much again we shall see significant change.