The Molineux Sleepout is back for 2022, offering the opportunity to spend the night sleeping under the stars at the stadium whilst raising vital funds to support people who are vulnerable across the city.

From 7pm on Friday 18 November, participants will spend 12 hours in the Stan Cullis Stand to both raise awareness of some of the challenges facing people in Wolverhampton as well as vital sponsorship to be shared between Wolves Foundation and the Good Shepherd.

Over the three previous sleepouts – two conducted at Molineux and one ‘virtually’ – approximately £115,000 has been raised, and again all funds will be ploughed directly into projects run by the two charities in the local community including around areas such as homelessness and food poverty.

Also, for the first time this year, young people will be able to take part, with anyone over the age of 13 able to sign up but all under 18 needing to be accompanied by an adult.

And supporters from across the world are also being encouraged to join the event, whether in their gardens or – situation and regulations permitting – on beaches or other exotic locations!

“We are really pleased to be able to announce that the Molineux Sleepout will again return this November, because it has become such an important part of the Wolves Foundation calendar,” says Head of Wolves Foundation Will Clowes.

“Not only does it raise awareness of some of the challenges facing the more vulnerable members of our communities, the funds raised can help make a real difference to helping those people improve their lives thanks to projects run by the Foundation and the Good Shepherd. It is also always a great event to highlight the strong community spirit that exists in Wolverhampton, with so many people coming together to help others in a really positive and supportive atmosphere.”

“This year, as well as being able to welcome young people for the first time, we would also love to see fans from around the world take part, showing our ‘One Pack’ mentality across the globe.”

Wolves Foundation, which delivers over 40 different projects for people of all ages and abilities across the city, are once again partnering up with the Good Shepherd, a charity situated opposite Molineux which provides food and support services to the people of Wolverhampton.

Good Shepherd CEO Tom Hayden added: “We remain extremely grateful to Wolves Foundation for continuing to allow us to join with the Molineux Sleepout and share in raising awareness of the vital work both charities deliver in the city.

We know that it is a challenge for people to give up their normal home comforts and sleep outdoors in the cold of November, but to have seen so many take that on in recent years, and raise so much money, is an inspiration to all of us connected with the Good Shepherd. I think we have all seen that the city of Wolverhampton has such a big heart, and even during these challenging times, hopefully there will be another great turnout which will show that with a strong community spirit and sense of teamwork, we can continue to support those who need us most.”

“It is difficult for a lot of people with the way things are just at the moment, but ourselves and the Wolves Foundation are continuing to do everything we can for those who require our help.”

Many Wolves staff past and present have taken part in previous Molineux Sleepouts, as well as Foundation ambassadors Karl Henry, Johnny Phillips and Anna Price, local MP Stuart Anderson and last year’s Mayor, Councillor Greg Brackenridge, with many others popping in to show support.

For karl Henry, it is a really important event. “I have been fortunate to have taken part in all three previous Molineux Sleepouts and am hoping to be there once again this year,” says the former Wolves captain. “It is an event which shows so much of what is good about Wolverhampton, people coming together to support others who are in need, and raising funds towards vital projects across the local community.” 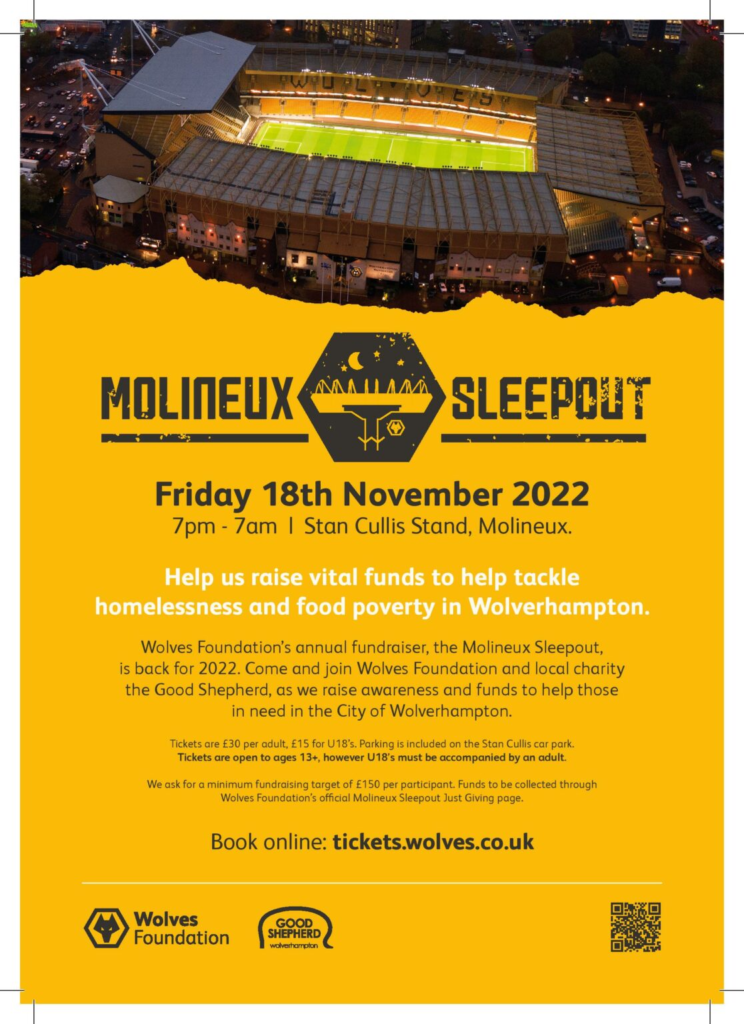