If you have been walking near the Bullring shopping centre and St Martin’s Church in Birmingham City Centre this past week you cannot have failed to notice this striking statue, Alex, which was located in the city centre on 8 December for four days. This installation was part of a campaign by Crisis to highlight the impact of street homelessness and the importance of not ignoring this issue but of the need to start a conversation about it.

With new research revealing 300,000 households could be forced into homelessness next year, Imelda Staunton and Jonathan Pryce, Crisis Ambassadors and stars of the hit Netflix series The Crown, unveiled a towering hyper-real sculpture of a person experiencing homelessness at London King’s Cross on the morning of 5 December, making homelessness impossible to ignore this winter.

With people experiencing homelessness being ignored everyday the sculpture, named Alex, stands as a visible testament to the hundreds of thousands experiencing the worst kinds of homelessness, with sleeping on the streets, sofa surfing and living in temporary accommodation becoming more prevalent as the cost of living crisis bites. The sculpture’s incredibly realistic facial features – brought to life via computer technology and using the profiles of seventeen people facing homelessness who have been supported by Crisis – were created to further reinforce the humanity in people experiencing one of the most brutal forms of homelessness – rough sleeping.

Taking a considerable 10 weeks to create and sitting at 2.5 tonnes, the sculpture was surrounded by QR codes which led visitors towards the website and opportunities to donate to the charity. Alex was situated at London’s Kings Cross for two days before being transferred to the Birmingham Bullring where it continued to raise awareness in the United Kingdom’s second largest city between 8th to 11th December. 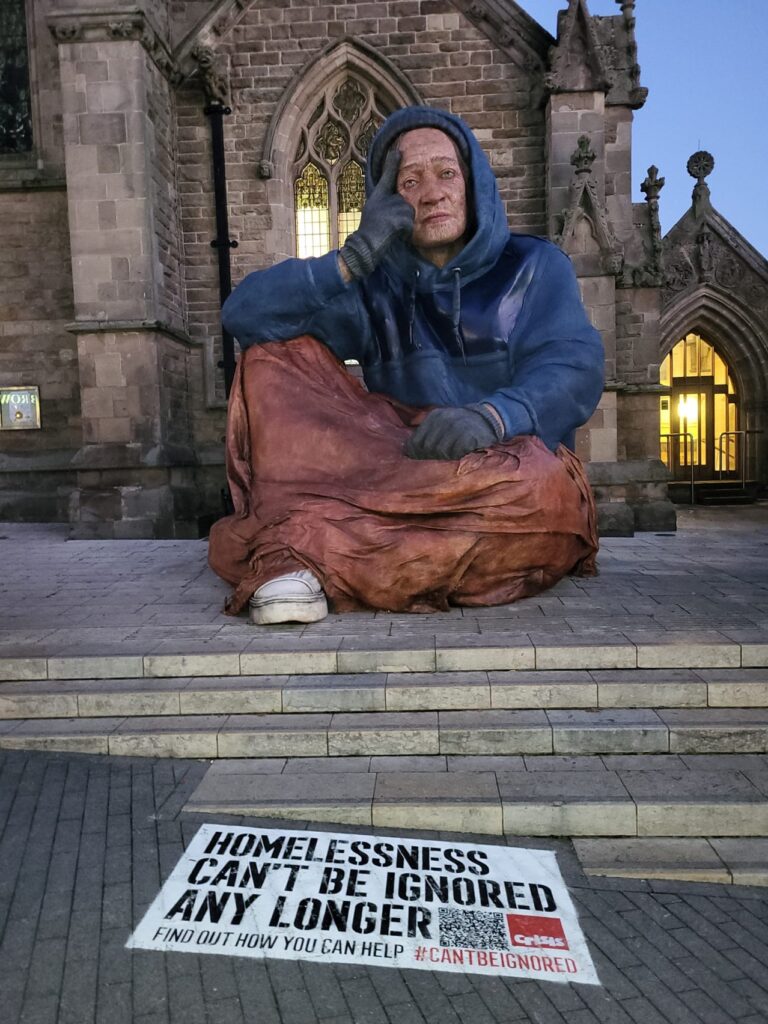 The powerful stunt comes as research has revealed 300,000 households across Britain could be forced into homelessness next year if the government fails to change its policy, with thousands suffering the worst forms of homelessness including sleeping on the streets, sofa surfing, and living in temporary accommodation such as hostels and B&Bs.

The stark warning is made in The Homelessness Monitor: Great Britain, new research from homelessness charity Crisis led by Heriot-Watt University. The estimate, that on any given night in 2023, 300,000 households could be experiencing the worst forms of homelessness, is up from 227,000 in 2020, an increase of 32%.

There are clear indications that soaring living costs and a rapid decline in affordable housing is pushing people into homelessness. Recent figures (October 2022) from the Combined Homelessness and Information Network (CHAIN) show a sharp rise in rough sleeping across London, with 3,628 people sleeping rough from July – September 2022. This is an increase of 24% compared to the same period last year. Most concerningly, the overall increase is being driven by people sleeping rough for the first time – with a total of 1,844 people new to the streets.

Crisis is urging the Government to wake up to the seriousness of the situation and take action to increase housing benefit so that it covers the true cost of rents. Two in five private renters (1.7 million households) are reliant on housing benefits to keep a roof over their heads, but this vital lifeline has been frozen since early 2020 and the amount people receive is based on figures from 2018-19. This failure to keep pace with actual living costs – with rents rising at their fastest rate in 16 years – risks pushing tens of thousands of the poorest households into homelessness.

Speaking at the unveiling of the sculpture in London, Crisis Ambassador Imelda Staunton commented:

“The intention of this incredibly lifelike sculpture is simple: homelessness cannot be ignored any longer. The cost of living crisis and rising rents are exacerbating an incredibly difficult situation and Crisis’ research highlights as many as 300,000 households could be homeless next year, a shocking scenario to be faced with. Crisis has always been close to my heart and today I am proud, as an ambassador, to stand shoulder to shoulder with those experiencing homelessness as we look to encourage action. As a nation we need to do better and this Christmas, we can all be part of that change. This installation stands as a testament and a rallying cry, we cannot sit idly by and watch the situation worsen.”

“300,000 households face homeless next year if the UK government doesn’t change its course. It’s that simple. As a country, we are going through a difficult time but we can’t ignore the mounting pressure that is building on low income households as they struggle under the weight of price rises they cannot afford. I am proud today to stand shoulder to shoulder with Imelda staunton and fellow Crisis clients as we unveil this beautifully lifelike giant sculpture. We need to remember homelessness is solvable, and can be ended for good through sensible policy changes and a good hearted political agenda. Let’s keep reminding Wesminster of this, because by standing together this Christmas, we can achieve great things.”

“I’ve been incredibly privileged to work with Crisis to bring this sculpture to life. It’s been a fascinating process harnessing artificial intelligence to create a face that represents homelessness, a problem that all too many of us ignore and struggle to engage with. This is the largest sculpture I’ve ever created and I sincerely hope it makes the desired impact and stops everyone in their tracks so they have no choice but to reflect on the issue and hopefully support this wonderful charity.”

With the homelessness crisis set to worsen in 2023, Crisis is calling on the nation to continue with their charitable efforts and donate what they can afford this Christmas. Head over to crisis.org.uk/cantbeignored to find out how you can help.