My name is Lutfor Rahman and I was born gay. I am from a very conservative community of Bangladesh. When I was 2 weeks, old my mother died. In 2009, when I came out to my family, they disowned me. Being gay in my country is forbidden by law and Sharia. So I had no other choice but to leave my community. I was moving from district to district to survive but in the end I gave up and came to the UK in 2010 on a student visa. 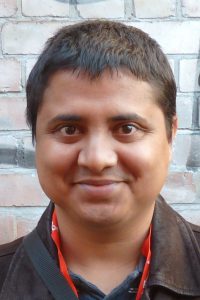 After moving to the UK I hoped things might change. But I was struggling with PTSD. I didn’t attend college, barely went out and was very scared of people around me.

In 2014 I heard about asylum. I little knew that I was going to imprison my life with this claim. I was detained. When I got bailed out of detention I was traumatised. I was not allowed to do any job and struggled with depression. I fought for 2 years and was refused in April 2016. To make things worse I got a letter to leave my accommodation. I did everything to be positive in that moment but it did not work. Soon after my house supervisor forcefully removed me from my home. I lost hope and became suicidal.

First day of destitution I was very scared and had several panic attacks. I took one brief case and a backpack of clothes and documents. I had £2 cash only. I went to the city centre and thought I could live with other homeless people on the street. But when night fell, I was scared. After one night I realised someone had stolen my phone. I cried and cried all the time. Unfortunately sadness didn’t fill my belly. Having no money and no idea how to deal with this situation I went to the city centre to beg. But I realise skin colour plays a vital role in that job.

After a few days I found some charities which help with food and clothes for people like us, so getting meals became easier. I had now lost my papers. Being honest I was living like a zombie. There was no hope, no dignity, no life, no feelings, no interest in improving myself. Eventually I appealed and got my accommodation back.

When I got home I was very happy in the first few days and then realised I had lost everything in the 29 days I lived on the street. I became isolated and paranoid. Still I can’t find those lost pieces of myself.

It would have been an unimaginably immense help if I had access to an action group and destitution fund like this in those days. At least it could have made things less miserable and I could feel like someone was there with me. This would have given me the freedom to pay for transport, food and have my dignity back.

This is why I started volunteering at the Mustard Tree. I help people who are going through a difficult time and need help. I am deeply honoured to have the opportunity to be a part of an action group working to help destitute migrants. I am relieved to do something that could give somebody hope at a desperate time.