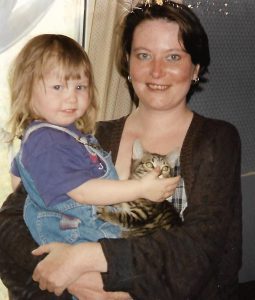 It was World Suicide Prevention Day last week and I was inspired to share my story. I am not one for displaying my feelings publicly, so it has been hard for me to publish this.

On Saturday 13th April 2013 I was working at my local supermarket selling newspapers and nibbles. I must have sold so many of those newspapers…
After finishing my shift, my dad phoned me saying he and my nan were going to pick me up. (My nan never picks me up). The date was 5 days after my 19th birthday and all I thought was, “they must have a late birthday surprise for me,” so I skipped into the car.

The next thing I remember is them all sitting me down in my dad’s flat and looking at me and I started to clock that something wasn’t right. They looked awkward and anxious as they continued to eye me; then my nan finally said, “Clare…,” and I simply replied, “she’s dead, isn’t she?”

Then my nan and dad were bickering about this damn newspaper and whether to show me or not and I grabbed it and the headline read: ‘Body Found in Street,’ with a picture, a picture of her, of her body… of my mum.

All morning, I had been selling those papers, informing every one of my mum’s death, before I even knew myself. The thing is, she wasn’t found in the ‘street’ at all. She had taken herself to a secluded spot to live out her final moments; a place away from prying eyes but clearly not from predatory paparazzi.

It was the day of the viewing and up until this point I believed she had died from the lifestyle she’d been living. Homeless women, on average, die at the age of 43. My mum was 48, so I had expected that she wasn’t going to make it much longer. She had even told me she wouldn’t. I remember the smell of formaldehyde, masked with cheap air freshener, as I gave the nod to confirm it was really her.

After the screaming, crying and terror was over the coroner said, “would you like to see the note?”
“What note?” I replied. I had no idea there was one. The coroner handed me a short note, scribbled on a scrap piece of paper, which read: “pain is 2 much now – so sorry – luv u. M.”

I looked back at my mum again and thought the cliché: “at least she’s at peace now,” and I left.

Over 4 weeks later, the funeral finally arrived. The homeless community turned up in their masses, some arrived in a mini bus, some walked miles with their heavy rucksacks, some paid for taxis with their little funds, some brought flowers, some painted paintings; all were selfless. What I learnt that day was that these guys made a family of their own out there and that they love, protect and share with one another. They told me a saying that they have on the streets; “it’s the love that keeps us warm.”

More needs to be done to help the forgotten people of OUR society. Homeless people are 6x more likely to take their own life than the rest of the general population. This statistic alone should be enough to inspire change.

This is why I now work for Street Support, who are bringing together homeless organisations and charities, to ensure people get heard and don’t slip through the cracks of society. Instead of passing blame from organisation to organisation, we pass advice, hope and compassion. I truly believe this holistic approach will save lives.

If you have been affected by any of the issues spoken about, or know of anyone who has, please reach out. Start a conversation today to potentially save a life.