With the surge of generosity that comes at Christmas, we are delighted to see the Big Change donations top the £40k mark!

This fund makes a huge difference to individuals, paying for items they need to support them to get off and stay off the streets.

Change4Good has used money from the Big Change fund on 11 separate occasions. Here Paul gives some examples of how Big Change has helped their work with vulnerable rough sleepers…

Tom was a rough sleeper who Change4Good tried to engage with on several occasions. He didn’t think anything could really change for him – he had heard everything before and been let down repeatedly. We continued to try to engage with Tom and saw an opportunity when Tom showed them his trainers which were falling apart.

Wearing poor footwear, blisters from excessive walking, difficulty to dry your wet feet or change your socks regularly causes problems with a whole host of foot related problems. Tom was asked what size shoe he took. He was a size 8 but had been wearing a size 10 as that’s all he could find. We used Big Change funds to buy Tom a new pair of boots and several pairs of clean socks for him. Tom was very grateful, and it demonstrated that people do care about him, and that support is out there.

Over several weeks, Change4Good continued to build our relationship with Tom to the point where we could offer him a bed space through one of our contacts into a hostel.

Change4Good engaged with Jamie on a busy street in Central Manchester. Many people would presume that Jamie was homeless and may buy him a sandwich or a coffee, but Jamie wasn’t homeless. Jamie was a young father with a family who lived in a house nearby. He had been forced to access the streets to beg for spare change after a series of bills and benefit delays had caused serious financial hardship.

We know that begging and rough sleeping is dangerous. On this day, Jamie spoke to the right people and we were able to help him access immediate funds through Big Change. We put £40 on his gas and electric bills. Jamie also mentioned that he needed to buy his young son some nappies and so we bought these. Change4Good went further and arranged for Jamie’s landlord to contact him to discuss his financial situation and provide further help so that he could avoid being in this situation again.

Sarah was someone who Change4Good had been supporting for several months when we came across her on an outreach session. Sarah’s situation had taken a series of difficult and traumatic changes which had caused her to be rough sleeping again. Talking to him, support was in place but on that day, Sarah just wanted to chat about things to take her mind off her situation and we were more than happy to do so.

During our chat, Sarah mentioned that she really didn’t feel like the woman she used to be; she mentioned that she hadn’t even got a second pair of underwear or socks so was having to wash and dry the same pair in the sink. Change4Good offered to take Sarah to a shop and buy her some underwear and warm socks. She was really pleased – Sarah said that she had stopped feeling like a woman. Using Big Change funds hopefully made her feel more human that morning.

Tony and Change4Good met one morning on Market Street in Manchester. Tony was warm and engaging. He was really open to receiving help but confirmed that sometimes he just buries his head in the sand rather than dealing with some of the very complex problems he has. He is engaged with a local medical centre but agreed that he doesn’t always attend.

After speaking to his housing team, it was agreed the best way forward for both Tony and his housing team was to buy Tony a cheap mobile phone so that they could both contact each other. Using the Big Change fund to buy a cheap, disposable mobile phone, Change4Good circulated his phone number between all Manchester support agencies working with the homeless. Tony was contacted and went into the medical practice to continue his journey away from rough sleeping.

Jacky was sitting in Piccadilly Gardens and approached Change4Good. She was upset and crying. Our outreach team sat Jacky down and tried to figure out what was the matter. Jacky, it turned out had broken her finger the previous night and was in a lot of pain as a ring was trapped on her finger, cutting off circulation and causing her finger to swell up.

Change4Good understood Jacky needed help and support to get the ring cut off. We sat down with her and listened to her concerns. Jacky had so far dealt with the pain by getting drunk. We used Big Change funds to take Jacky to A&E in a taxi. While going there, she disclosed several other serious medical concerns which would need to be picked up on. Sitting with Jacky in A&E, she mentioned that she used to get support from The Wellspring in Stockport. We contacted the team at The Wellspring who were desperate to see Jacky given the situation explained to them, so using Big Change funds paid for a taxi to take Jacky directly there.

A phone call later that day, confirmed that Jacky was met with big hugs, a change of clothes, a warm shower, support and most importantly a bed for the night. She would see a nurse the next day. This is real help. Linking up the agencies doing invaluable work with vulnerable rough sleepers and overcoming practical barriers. While Change4Good was sat on the street speaking to Jacky, two members of the public came over with a coffee and 12 cheap sausage rolls. A nice gesture? Helps for half an hour? Jacky needed real help and practical solutions to her problem and between Change4Good and Big Change we ensured she got this help.

Scott was rough sleeping but he wasn’t homeless. Scott had ran away from a tenancy in Oldham when things had got too much for him to cope with and rather than seeking help he had been sleeping rough for 3 months in Manchester city centre. Scott was approached by Change4Good for a chat one morning. When we discovered he had a home to go to, we contacted his landlord to explain the situation. They really wanted to see Scott and help him sort his home out. Scott wasn’t ready to go there and then but Change4Good, using Big Change funds, paid for a weekly pass to ensure that there was lots of opportunity for Scott to approach his landlord for help and ultimately stop from rough sleeping.

Find out more and donate via BigChangeMCR.co.uk 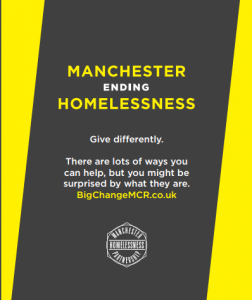