On 10 March people gathered to hear about progress made addressing the issue of homelessness in the city during the last year.  At the summit they were told how services have been improved over the past two years, with recent figures showing that the number of people sleeping rough in Southampton has reduced by 48% over the last year. The figures, released by Southampton City Council earlier this week, showed that a total of 15 rough sleepers were located during an annual autumn rough sleeper count carried out by the council’s Street Homeless Prevention Team, which showed a drop from 29 homeless people on the same night during the previous year. 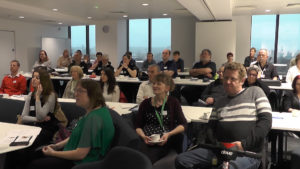 Speaking at the meeting, Liz Slater, from the homelessness service at the city council, said: “I think that is quite a successful story and it is one that we should be pleased about. It is not enough but it shows the value of the approach we have adopted. There’s still an awful lot to be done, we can’t be complacent about that.”

Liz also highlighted the cooperative approach in the city,  that has been ratified in the organisations that have signed up to The Southampton Rough Sleeping and Begging Charter, has led to the Council being successful in obtaining additional funds for the city to use on homeless services. She also highlighted that working together has helped to ensure there is a co-ordinated approach to homeless services.

The summit were also told about The Churches Winter Shelter, where 7 city churches opened their buildings,  and recruited 156 new volunteers working in teams to support extra bed spaces. This was a pilot scheme which is hoped can be expanded for next winter.  Go Southampton outlined a new giving scheme which will be launched in the spring. The work done by other charities such as Dentaid was praised and the summit heard about the work of Help The Homeless who distribute food.

Paul Woodman, from Street Support Action Group, encouraged those there to continue with the effort and said: “We have come together as we want that collective strength to continue.” Jo Ash, from Southampton Voluntary Sector, restated the aim: “Together we can make Southampton a better place and a place where no-one needs to sleep rough.” 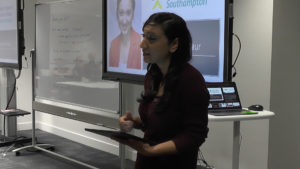 The summit was concluded with an address from Cllr Satvir Kaur, cabinet member for homes and culture. She acknowledged that despite all the work being done, that dozens of people still sleep rough.  She added: “We know that during the course of 2019 we saw 200 more rough sleepers. We will continue to do our best. Together we are transforming lives in our city.”