Solent University have been founding partners for Street Support in Southampton. They have hosted several conferences on homelessness and provided work placements to help the work of Street Support.

This year, Solent University offered us the chance to pitch to their final year Social Media students. The ask was for a group of students to create a local social media campaign on a single issue. The pitch went well and a group of five students took on the challenge of working with Street Support in Southampton.

Paul Woodman gave an initial briefing to the students outlining the vision for Southampton to be a place where no-one needs to sleep rough or beg.  He talked about the need to raise people’s awareness of the services that already exist in Southampton and the specialist support that is available as well as the need to add more partners into the work of Street Support.

At the next meeting, the students came up with the idea of a split-screen for the story: one side showing a person on the streets and the other side showing them in their own home. Paul suggested having a female lead character and then, suggested we meet some people with lived experience to build the idea of the story. 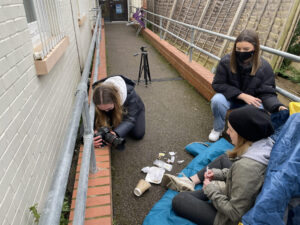 With Project Leader, Claire Stagg from the Two Saints Day Centre, the team generated ideas about the split screen and what would be shown. We agreed on braving the elements, getting a drink when you wanted one rather than when one was given to you and to focus on a positive end result also including hygienic drug use and ability to make medical appointments and access medicine.

Paul Woodman provided ethical consent to the University for the project to include the re-enactment of drug use and the project was approved by the lecturer, Martin Hughes.

Emma’s story was reflective of a woman’s experience (different name), known to the Day Centre, and she gave permission for her story to be told using the split screen. We were all aware that it was a tall order to ask the students to depict this story on video with an actor, without the help of people with lived experience. So, we set the scene of Emma sleeping rough at the Day Centre itself. This enabled those with lived experience to set up the props and scenery to be realistic to their experience. One helper was very pleased with how authentic it looked and was himself taken back to his own memories of days of sleeping rough and substance abuse. He was supported through this painful recollection of his own life story.

The end result was a very powerful short video. Commenting on the video and process: 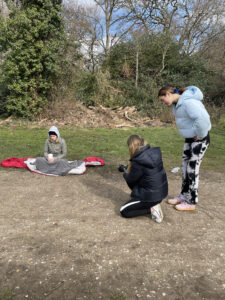 pport and Two Saints gave us an in-depth insight into the life of someone who has experienced homelessness. Being guided by someone with lived experience helped us to accurately highlight various difficulties a person who is homeless may experience; in conjunction with the help support services can provide. Spreading awareness of the different services the partners of Street Support can provide is vital in the pathway to helping others.”
Chloe: Creating this campaign opened my eyes to the amount of work organisations such as Street Support and Two Saints put into their services. Their work is a great asset to the local area and taught us all about the harsh realities of homelessness, which we feel is important that everyone is aware of.
Louisa: “Working with Street Support Southampton and Two Saints has allowed myself and my group to explore the reality that face so many people across both Southampton and the UK. Meeting someone with lived experience was hugely helpful as he was able to give us tips on how to make the campaign as authentic as possible. Through the project, we hope we’ve helped the support services with their goal of gaining more partners and organisations.”
Katya: “Learning how to approach a sensitive subject area taught me so much about content creation and the topic itself. From the offset of this project, I soon realised I knew nothing about the depth and complexities of the topic, and working with Street Support and Two Saints really opened my eyes to the realities of both living on the streets and the services support services like themselves provide.”
Chelsie: “As a media creative at Solent university I have loved every moment of working in a group environment for Street Support. Communicating with Paul and Claire has been really easy with regular group meetings on behalf of us all it has made it easy to work as a group even with the restraints of covid19. I think the biggest satisfaction element for me is knowing that as a group we have helped spread a message raising awareness towards homelessness. I have great pride and satisfaction knowing that I have helped raising awareness for the homelessness in Southampton.”

Anonymous with lived experience on seeing the video:

“Emotions can revisit you when you’re not expecting it. Wanting to share so others can understand is very important to try and show how it really is.This can be hard sometimes if you have lived it .”