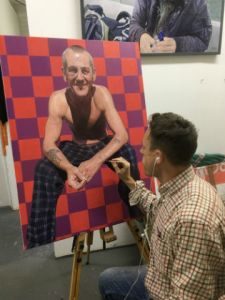 Earley’s new exhibition, ‘Hyper-realism’, presents a series of powerful and emotive portraits of people who are homeless – those he describes as living “on an emotional knife edge”. Those visiting the gallery can also find information about Southampton City Council’s partnership with Street Support Southampton.

Paul Woodman, co-founder of Street Support Southampton, explains: “Homelessness is a crucial issue in our city and we want to ensure local residents know how to provide tangible help. We’re funded by the City Council and Go! Southampton, and we work in collaboration with 40 different organisations including faith groups, hostels and statutory agencies. We’ve printed brand new leaflets to be available at the exhibition, explaining what we do and letting people know how to connect rough sleepers with our outreach workers.”

Speaking to Olivia Page, a homelessness reduction project worker with the organisation, James Earley explains what inspires him to depict homeless

He also believes his work can help to overcome misconceptions about rough sleepers: “I went to private school and some of my friends from the wealthiest families have ended up on the streets in their adulthood mainly due to mental health issues. If these problems had been addressed at an early age, they wouldn’t have ended up there.”

And while he talks eloquently about the over-arching challenges of mental health and of long-term homelessness, Earley also emphasises the importance of seeing the homeless as individuals with their own unique stories: “Living in Toulouse I got to know one guy called Jacque very well. When he came out of the army, he had nobody to help him and so the streets were his only option. In London near the National Portrait Gallery, I met a girl called Amy and her dog. At the time when I saw her, she was getting to the point where all hope was lost.”

Asked about the impact he hopes to gain from his work, Earley explained that some of his buyers had set up homeless charities after seeing his work: “I believe that my art makes people more aware. With a painting, you can stare at it for as long as you want, and then this makes people start asking themselves questions.”